Ancient Egypt conjures up images of pyramids, the abundant banks of the Nile, and the mysteries of sealed tombs, filled with beautifully preserved mummies and artifacts that have survived for centuries.

The most famous Egyptian tomb is Pharaoh Tutankhamun’s, which was uncovered in 1922. The treasures within have fascinated historians, explorers, and everyday people for a hundred years, and among its many artifacts, there are plenty of crystals.

From Amazonite to Lapis Lazuli, Egypt’s pyramids show the high esteem that Ancient Egypt had for crystals; the fact that Egyptian royalty wanted to bring these stones with them to the afterlife highlight their importance. As we learn more about myths and history surrounding Ancient Egyptians and their crystals, we can discover new sides to these familiar stones and feel a little closer to our past. 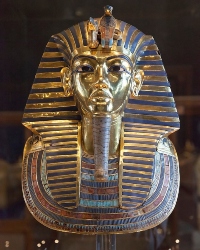 Amazonite, known as “Uat” to the Ancient Egyptians, was very popular, largely because it was easy to carve. Archeologists have found Amazonite beads, amulets, and figures in a variety of tombs, including Tutankhamun’s.

Amazonite was one of the materials chosen for the famed Book of the Dead, as hieroglyphs displaying Egyptian funerary rites were carved into the stone. It symbolized the afterlife and protection.

Carnelian was intimately connected with the myth of Osiris, the king of the Underworld and god of death and rebirth. According to legend, before he became the god of the afterlife, Osiris ruled over Egypt. However, his brother Seth, god of the desert and storms, became so jealous that he decided to kill Osiris and usurp his throne. Seth cut Osiris’ body into pieces and scattered them around Egypt.

Osiris’ wife, Isis, was devastated by his death. She wandered all over Egypt, gathering the pieces of Osiris’ body and mummified them together. Then, she breathed life into the body and resurrected her husband. His worldly kingdom taken by his treacherous brother, Osiris gained a new realm: the underworld.

Carnelian was considered sacred to both Seth and Isis, echoing Seth’s fiery energy and Isis’ fertility. The stone appears in King Tutankhamun’s death mask, perhaps a plea to Isis to help him enter the afterlife as she helped Osiris.

Ancient Egyptians associated Chrysocolla with wisdom, harmony, and compromise, and they believed it was the union of the divine masculine and the divine feminine. According to legend, Cleopatra gave Chrysocolla beads as gifts to visiting diplomats in the hopes of ensuring successful negotiations.

Just as we equate Citrine with solar energy, Ancient Egyptians associated the stone with the Sun god, Ra. They believed that the crystal got its signature golden hues directly from the god and often fashioned it into jewelry. One of the oldest and most powerful gods in the Egyptian pantheon, Ra is literally the Sun, and he rides his barge across the sky during the day. At night, Ra plunged into the underworld, where he battled a giant snake, Apophis, who wanted to destroy Ra and, therefore, all of humanity.

Clear Quartz was an important part of Ancient Egyptian medicine—no surprise for a modern master healer stone. Cylinders made of this crystal were believed to balance the body’s energies, and Clear Quartz was also a popular material for protective amulets.

Ancient Egyptians believed that Clear Quartz contained spirits and that their vibrations could be used to control the weather, protect from danger, and assist with divination. This otherworldly connection led to an association with the goddess Hathor. The mother of Ra and occasionally conflated with Isis, Hathor was another deity that traveled between the worlds of the living and the dead and assisted souls with their journey to the afterlife.

Many ancient societies referred to all green gemstones as “Emerald,” but we know that Ancient Egyptians mined genuine Emerald at the Sikair-Zubara mines, also known as Emerald Mountain. Emerald gained an association with fertility, immortality, and wisdom. Many Ancient Egyptians believed that Emerald could dispel falsehood and reveal the truth.

Emerald was allegedly one of Cleopatra’s favorite gemstones, and she used it frequently as a symbol of her power and godlike status. Cleopatra is said to have given Emeralds with her portrait carved into them as gifts to other royals and government officials. Her love for Emerald was so strong that some dubbed the Sikair-Zubara mine “the Mine of Cleopatra.”

Emerald also carried a connection to Thoth, the god of time and wisdom. Alchemists believed that Thoth carved his mystical knowledge on Emerald tablets, including the key to creating gold. Even during the Middle Ages, Thoth’s Emerald tablets were highly sought after, although they were never found.

Lapis Lazuli represented royal power and divinity for Ancient Egyptians. They believed that their pharaohs were descended from Ra, the Sun god, and Lapis Lazuli was the physical embodiment of this supernatural origin. Lapis Lazuli was a favorite crystal for religious figurines and amulets, many of which were buried with royalty. Lapis Lazuli was also featured in jewelry and decoration, and it was even ground into a powder for use as eyeshadow and eyeliner. Lapis Lazuli was so popular that Cleopatra supposedly quarantined a supply of Afghan Lapis and used it to inlay her palace walls.

Lapis Lazuli was particularly associated with Ma’at, the Goddess of Truth, as Ma’at’s priests wore Lapis stones engraved with her image. Some Ancient Egyptians believed that Lapis Lazuli opened up a channel of divine communication, which is no surprise to modern crystal users who associate this crystal with the Third Eye Chakra.

Libyan Desert Glass, also known as Gold Tektite, was formed when a meteor struck the Sahara Desert. Although Ancient Egyptians likely did not realize that this crystal had such celestial origins, they valued its ascension energy and associated it with Thoth, the God of Wisdom. 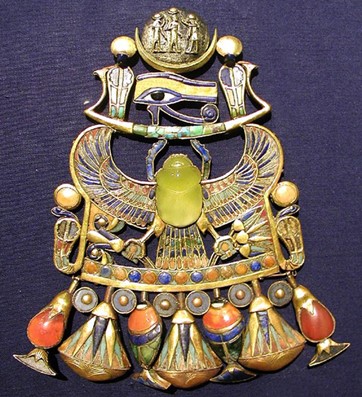 Malachite was considered sacred to Horus, the son of Isis and Osiris. Horus has a falcon head, which Ancient Egyptians believed represented the union of the heavens and the earth, as well as the Sun and the Moon. After Osiris was murdered by Seth, Isis hid Horus in the Nile marshland. There, he had to defend himself from all sorts of dangerous animals, including snakes and scorpions, before he could claim the throne of Egypt, which gives Malachite its protective power.

Imported Obsidian from the Mediterranean was an important part of Egyptian funeral rites. Because they are so sharp and swift, Obsidian blades were crucial to the mummification process.

Ancient Egyptians referred to Peridot as the “Gem of the Sun,” and even today, Peridot remains the National Stone of Egypt. Although it was called the Gem of the Sun, Peridot’s green color was associated with Isis and the lush plants that grow along the banks of the Nile, rather than Ra, the Sun god. Peridot was often used to create beads and protective amulets, and priests seem to have drunk ritual beverages from Peridot goblets.

Peridot was so important to the Ancient Egyptians that even the mine where it was found, Zarbargad Island on the Red Sea, has mythology surrounding it. According to legend, a hoard of snakes used to live on the island, guarding the Peridot from intruders. However, a pharaoh drove them out into the sea and finally made the mine accessible to humans.

Red Jasper has always had an association with energy, creativity, and personal development. For the Ancient Egyptians, Red Jasper represented Isis’ blood and her life-giving, nurturing energy. Women struggling with fertility wore Red Jasper in the hopes of conceiving, and it was also used as an amulet to ward off evil spirits. Folk medicine even said that Red Jasper could heal snake and spider bites.

Ancient Egyptians saw Ra, the Sun god, in Tiger’s Eye’s yellow bands. The crystal was believed to hold all of the energy and power of the sun at noon—Ra at his apex. Modern crystal users who recognize Tiger’s Eye’s motivating and revitalizing properties have a lot in common with ancient pharaohs!

Tourmaline comes in a wide variety of colors, and Ancient Egyptians developed a myth to explain this phenomenon. According to Egyptian lore, Tourmaline was formed in the center of the Earth, and when it left the planet’s core, the stones passed through a rainbow en route to the Sun. The rainbow dyed the crystals different colors, resulting in the varying shades of Tourmaline that we are familiar with today. Pink and Green Tourmaline were particularly prized in Ancient Egyptian jewelry and artwork.

Turquoise has been used in Ancient Egypt for longer than any other crystals, with the Sinai Turquoise mines opening as early as 5,500 BCE. This crystal was particularly special to Egyptian miners, who associated it with the goddess Hathor. Known as the “Mistress of Turquoise,” Hathor’s duties extended beyond motherhood and the afterlife to include protection of miners, musicians, and dancers. Because of this divine connection, Turquoise is often found in tombs and funerary items, such as Tutankhamun’s death mask.

Many of our modern ideas about crystals have their roots in the cultural practices and mythology of Egypt, so next time you reach for your Lapis Lazuli, think of Cleopatra and Tutankhamun!