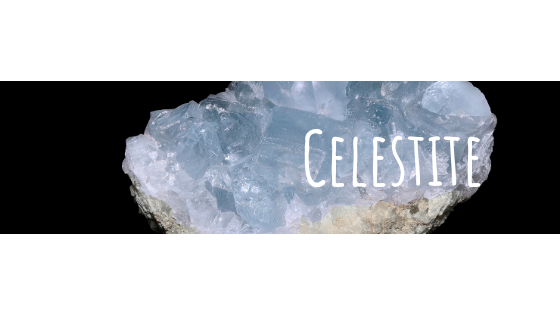 Celestite, also known as “Celestine,” is a tabular and prismatic crystal. It is part of the Sulfate family of minerals, and its color ranges from colorless to whites and blues. Rare red and brown Celestite stones can also be found. Most crystal collectors associate Celestite with its gray-blue variety, which is found in clusters and geodes.

Celestite’s name originates in the Latin word, “caelestis,” which means celestial, because of its sky-blue color. This crystal is typically found in sedimentary rock like Limestone. Celestite forms through a fascinating process: highly soluble nodules of Calcium Sulfate interacts with Strontium-bearing solutions, causing the Calcium Sulfate to dissolve and leave a cavity, where the Strontium reacts to create Celestite crystals. This gentle, peaceful stone is a powerful healer that connects you to divine energy.

Celestite relieves stress and anxiety, making it a great treatment for hormonal balance, as stress is a major contributing factor to hormonal imbalances and most chronic illnesses. If you suffer from obsessive behaviors and addictions, Celestite can help you let go. Celestite’s calming properties soothe the nerves and relieve anxiety responses like panic attacks and stage fright. Celestite is known to heal neurological and cellular disorders. It also supports eye, ear, nose, and throat health. Celestite detoxifies the body, regulating the digestive system and hormonal shifts.

Celestite is also an excellent pain relief stone, as our co-founder, Kelly, personally discovered. When her dog, Sara, hurt her leg, she was drawn to one of Kelly’s bookshelves, which has a variety of Celestite crystals on the bottom shelf. Sara would stick her head in the shelf, hover over the Celestite for a while, and then lay down next to it to sleep. It seems Sara intuitively knew that Celestite was an excellent stone to help relieve pain.

Celestite is considered a New Age stone! It promotes purity of the heart and attracts good fortune by dissolving pain and negativity. Celestite will bring about balance and alignment while providing inner peace.

If you are shy, Celestite will nurture courage and confidence. It also channels these energies to help you embrace new opportunities and step into your well-deserved spotlight. Celestite can calm your emotions when you feel overwhelmed or burnt out, and it relieves feelings of anger and frustration. Celestite aids with negotiation, bringing about peaceful resolutions, especially in dysfunctional relationships. Celestite gives you the ability to speak your inner truth and move forward with your most authentic self, without letting ego block you. Celestite will also help you release any emotional restrictions from your past, guiding you toward a higher path and way of thinking.

Celestite is a very high vibrational stone with angelic energy, making it great for Reiki practices. Celestite will stimulate clairvoyant communications with your ancestral and spirit guides. This connection to the spiritual realm also helps with dream work, particularly dream recall and lucid dreaming. Celestite promotes a deep, meditational state. Celestite relates to the Throat, Third Eye, and Crown chakras, allowing you to connect to your higher self and speak your truth. Celestite’s gentle energy also works to heal your aura. Astrologically, Celestite corresponds to Gemini and Libra. In numerology, Celestite vibrates with the energy of the numbers 2 and 8, which represent duality, truth and learning, as well as abundance, success, and achievement.

Celestite is considered a creative stone. If you are an artist, writer, or musician, keep Celestite in your workspace or wear it as jewelry. Use Celestite whenever you need clarity, especially when you are making a major life decision. This crystal’s tranquil vibrations calm your nerves before performances, public speaking, and other stressful situations. Leave a Celestite in a place where these anxious energies might be present, such as the office.

Use Celestite in prayer, meditation, and Reiki practices to enhance your connection to your higher self and ancestral guides. You can also use Celestite to help aid in astral travel.

You may feel tempted to keep some beautiful Celestite outside in your garden area on on your porch.  The beautiful baby blue color of Celestite will fade over time so it's best to keep it inside or someplace where it will not be exposed to direct sunlight.

Celestite and The Archangels

Use Celestite to invoke Archangel Raziel to tap into those psychic abilities you possess and fine tune them! Celestite is the stone of prophecy, clairaudience, clairvoyance and Clairsentience. Invite Archangel Raziel into your sacred space to give you a leg up on your divine gifts! Celestite can be placed under your pillow to aid in remembering your dreams.

Use Celestite to invite your own personal team of light into your sacred space. With the use of Celestite you at peace to call in your spirit guides of the light, passed down loved ones of the light, and the Archangels of the highest Christed light of the middle path.

We offer a wide variety of high-quality Celestite crystals and gemstones at great prices. Our collection of Celestite supports peace, courage, and harmony. You’ll love our fast shipping and friendly customer service.